Some more thoughts on closing gaps

August 19, 2017
There is a lot of talk, and action, going on at the moment in the Scottish education system, and others, around the closing of gaps and raising attainment. Indeed, the Scottish Government has directed a lot of resources, in terms of  finance, people and policy to try and address these persistent issues. Just about every school in Scotland started the new school year with extra funding through the Pupil Equity Funding (PEF) provided from Scottish Government direct to headteachers.

Unfortunately, the main criteria being used to allocate much of the funding being allocated is linked to free schools meals entitlement (FSM), and areas identified as having high levels of deprivation through the Scottish Index of Multiple Deprivation (SIMD). I say unfortunately, because the SIMD results in a 'post-code lottery' allocation to funding, with some areas getting substantial sums of money, whilst others get very little as a result of their rankings. Factors such as income levels, employment, health, education, housing and crime are used to establish a ranking for post-code areas, from the most deprived to the least deprived. There is no doubt that high levels of deprivation exist and are experienced in the areas highlighted by the SIMD. It is equally certain that similar levels of deprivation can be found in just about every other post code. Scottish Government recognises this, and it is highlighted by research, such as that produced by Edward Sosu and Sue Ellis for The Joseph Rowntree Foundation in 2014. 'Closing the attainment gap in Scottish education' This means every school, in every area, will have families and learners who are experiencing high levels of deprivation, but these can be 'hidden' in otherwise affluent post-codes. But, the allocation of extra 'raising attainment' funding to schools and local authority areas hardly reflects or acknowledges this, thereby disadvantaging those schools and learners further and contributing to widening of gaps.

The use of FSM entitlement as another criteria for further funding is also problematic. The new PEF funding is heavily linked to FSM, which means as a result just about every school (95% of them according to the Government) has received considerable amounts of funding targeted at the FSM cohort. The problem with that is that often FSM pupils are still attaining and achieving well, whilst others not in receipt of FSM are struggling due to other factors. In their guidelines, the government do say that schools can 'use professional judgement to bring additional children in to targeted interventions.' The problem there is that there might not be enough funding to allow schools to support other learners they can identify, as well as their FSM ones. I am not sure how schools will square the allocation of funding using one criteria with their desire to support other learners identified using different criteria? Again, gaps may be actually widened for some learners if schools are not careful.

In addition, the Scottish Government and Education Scotland have identified a list of 'what is known to be effective at raising attainment' strategies that schools are to seek to employ in spending this extra funding. The approved list includes, early intervention and prevention strategies, social and emotional wellbeing, healthy lifestyles, targeting of literacy and numeracy, promoting high quality learning, differentiated support, using evidence, partnership working and evaluation to monitor impact. There are twelve in total and schools are referred to the  Education Scotland and National Improvement Hub for further information and examples of 'good practice'. There is also an expectation that schools not only develop a plan in consultation for the allocation of these monies, but that they are able to monitor, evaluate, measure and report on the impact of those they employ. Therein lies the rub. The pressure is on to show impact, and quickly, with a thinly veiled threat that if you can't do this, future funding is at risk. Governments do persist in thinking short term and so schools and their leaders are between a rock and a hard place when allocating such funding and being able to demonstrate impact quickly.

I am becoming increasingly aware that the improvement of attendance is becoming one of the key focuses for  schools and local authorities as they plan for how they might use this funding. The argument being that if we can get more of our young people more often, then we will raise attainment and achievement. This is also something schools have readily accessible data on, which can be used to easily show 'impact'. 'Our attendance was sitting at 87%, after intervention it is now 91%.'  This results in money being spent on home-school link workers and more attention given to attendance and 'lates' by senior managers. I am aware of schools that now have a blanket policy of issuing attendance warning letters to parents when attendance falls below 95%, no matter what the reason. This has meant parents who's children have been off ill or in hospital with underlying medical conditions, receiving letters warning them that their child's attendance has fallen below expected levels and will now be monitored, with the threat of further action if the situation does not improve.

I am not saying attendance is not a factor, but I think schools and governments put too much emphasis on its impact, and less the 'why?' of attendance. If we insist applying neo-liberal approaches to education, any 'business' where a significant percentage of 'customers' were voting with their feet, would be looking to change its practices, not blame those 'customers'.

How does such an approach match with the stated desire and policy of developing more effective partnerships and collaborative working with parents? One of the problems with such a blanket approach is that it can take no notice of individual learner and family circumstances. In schools, we generally spend a lot of time getting to really know our learners, their families and the issues they are trying to deal with. Issues that may be impacting on attendance and punctuality, as well as a lot more around mental and physical wellbeing. So many learners and their families are dealing with issues teachers and school leaders have little experience of, and sometimes little empathy. We have to get better at trying to understand differences, and their impacts. Getting heavy-handed over attendance is another strategy that has the potential to widen gaps for many of our most vulnerable learners and families, and to create more barriers between ourselves and those we seek to support.

In addition, perhaps we should ask the question what happens if we get almost 100% attendance but the learning and teaching experiences for our learners do not improve? It is generally accepted that teacher effectiveness is the most important factor in school and system performance, and our ability in schools to close gaps. If that is the case, have we done all we can to ensure the learning experiences we provide are the best they can be, for all our learners? I would suggest we still have a long way to go. There are a lot of excellent teachers working in our schools, I have met them and am the first to defend them. But, there is still too much practice that is not so good and which fails to reach and impact on too many learners. Too much is still generic pedagogy that continues to be delivered, no matter who the learners are in front of the teacher. As I have said in previous posts, we need teachers with high levels of agency and adaptive expertise, who adjust their teaching and the learning in response to their context and the learners' responses. We are not there yet, because still too many teachers, and school leaders, continue with what they have always done, and see no reason to change, instead looking for the learners to change to fit what they do.

Education and schools should not be about command and control. They should be about collaboration and partnership, as everyone comes to see themselves as true life-long learners. Everyone I speak to acknowledges that learners have changed in capacities, aptitudes, attitudes and expectations. We, in education, have to do the same, instead of expecting current learners to change to fit into the systems and structures we have created for past generations of learners. We have talked a lot about the flattening of hierarchies in schools and systems, but how many of these still persist because various elements like where they sit, and their perceived power? In the meantime, nothing changes for teachers and learners, with gaps getting ever wider, and more and more coming to the conclusion that holistic education doesn't really start until you have left school and started living.

I will leave you with two Mark Twain quotes. 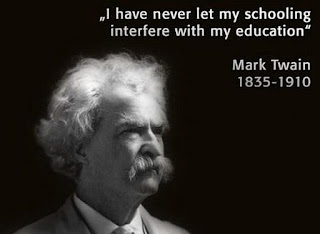 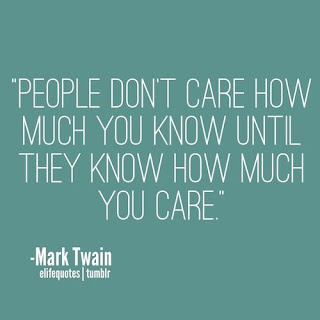 Popular posts from this blog

The Six Qualities of Educational Leadership

December 23, 2015
I wrote a post a few weeks ago (The six tasks of leadership 12/12/15) following an article about Sir Tim Brighouse, who had identified what he thought were the six key tasks for school leaders. My own list was a bit different to Tim's but it also set me thinking about what might be the qualities you would look for in high performing school leaders. I give you my six as a stimulus for discussion and perhaps your own consideration of what qualities we should look for in school leaders. The first is authenticity. I believe all school leaders need to be authentic and to really walk the walk of their talk. There can be nothing so dispiriting for school community members than being led by a leader who says one thing but does another. Remember to say what you mean and mean what you say. I think the highest performing leaders possess emotional awareness. They know themselves well and they know the people they lead well too. They understand the importance of relationships and how to ta
89 comments
Read more

Some thoughts for new student teachers

September 08, 2020
Having gained a host of new followers on Twitter, who are either completing PGDE, or other student teacher qualifications, got me thinking about the advice, thoughts, comments I would give to those embarking on their own professional learning journey.   It is heart-warming to see, and hear, the enthusiasm of new entrants into the profession. They are passionate about their career path, and are constantly enthusing about the high quality input they are receiving from lecturers, professors of education and practitioners. My first piece of advice would to use those feelings as a touchstone, to go back to and revisit, throughout your career, but especially when you are facing challenges. Teaching is one of the most satisfying and rewarding professions to be involved in, but throughout your career you will encounter a myriad of challenges, and during these times it is often worth your while reminding yourself of why you came into the profession, and re-consider your early enthusiasms.   W
14 comments
Read more

An Ecological Approach to School Development

May 21, 2020
Ahead of a Webinar discussion around Curriculum for Excellence, and how this can be reimagined, I have been thinking about our whole approach to curricular and school development. What follows is what I was wishing to talk about, if I hadn't experienced a few technical problems, that threw me and caused me to lose my train of thought. Apologies if you heard it and struggled to make sense! Hopefully, this helps. I think our approach to curricular and school development/change has always been piecemeal and fragmented. We have tended to view the curriculum as very much the subjects we teach, and the knowledge and skills we wish our learners to develop. This has only recently expanded (for some) to include the pedagogies we deploy to develop this knowledge and those skills. However, what we have consistently done, is to think about these independently of each other, and have been slow to make the connections, and their importance, between them all. Mark Priestley and others have p
10 comments
Read more